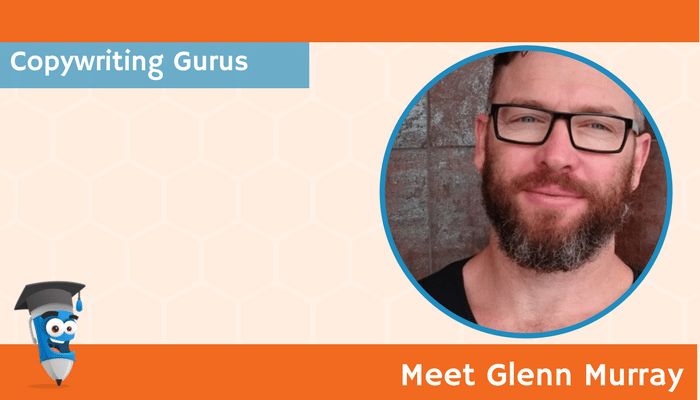 Glenn Murray is an experienced copywriter and was a keynote speaker at CopyCon 2017.

In this post Glenn will tell us a little about his copywriting journey and the gems he has learnt along the way.
Interview with copywriting Guru : Glenn Murray. #copywriting #copywriter @divinewrite

How long have you been a copywriter?

Tell us how you became a copywriter:

I was finishing up a Bachelor of Arts with a double major in English Literature and Linguistics, and still had no idea what I wanted to do when I grew up.

A friend doing the same degree came to uni one day and told me she’d gotten a job as a technical writer for a software company. I’d never heard of that, so I asked what it was, and when she told me, I said, “I could do that!”

That night I wrote to a few Sydney software companies, offering my soul for a few pennies, and one of them happened to need someone. They took me on as a casual, paying me $10/hr. I could have been earning more back at the Woolworths deli, but at least this way I didn’t come home smelling like cabanossi!

The biggest challenges are always financial.

Sure there are times when you’re so busy you can hardly breathe, but it’s always worse when you’re deathly quiet.

The prospect of going broke and being forced to go get a job is terrifying. Constantly dealing with that terror is the biggest challenge.

But outside of that, I’d say working through the busy times, no matter what’s going on in your world. Like when my wife had our first baby: I worked through the early part of her labour, and also when she brought our son home. Her mum came and stayed with us for a week, because I had a big job on which, according to the client, “just couldn’t wait”.

Of course, they didn’t review it for four months after I delivered it, but that’s a whole ‘nother story! :-(

What achievement are you most proud of?

Keeping my family afloat, financially, for all these years. Building Divine Write up from nothing to next to nothing. Overcoming the challenges above.

What advice do you have for newbie copywriters?

Know you can do it.

Let the words come out; don’t force them- unless you have to. Yeah, sometimes you have to, but if they’re coming out freely, let them.

Don’t be hampered by all the rules and best practices. Learn them, but also learn when breaking them is the best possible thing you can do.

What advice do you have for worn out old copywriters!

Switch up your pricing model, or the way you deal with clients. Offer a different service or deliver your copy using a different technology (a wireframe or Google Docs instead of Word).

Question everything, especially your attitude.

I don’t know that I have a writing quirk. Well, not one that pertains to the writing exactly.

I have one that pertains to the thinking though. I spin a texta (or pen or whatever’s handy) around my thumb – compulsively. Hundreds, if not thousands of times per day. Have been doing it since high school.

What are you fave writing apps?

What do you do when you hit a writing block?

Stop. Come back to it the next day. It takes a lot of discipline to do, but if the words aren’t coming out, forcing them generally won’t give you the results you want. Of course, there are times when you have no choice but to soldier on, and at times like that you have to have confidence that the words coming out will still be pretty good. If you don’t have the confidence, they’ll be shit.

What is your favourite thing to write about?

Tell us a funny story….

I once told my boss he had flowers or pollen on his shoulders. Must have walked under a tree. He just looked at me weirdly and walked away. The next day it was back.

Turns out he had really bad dandruff.

Have you had any similar experiences to Glenn? Please share in the comments below.