How a ‘homemade’ writer’s retreat made me a stronger writer 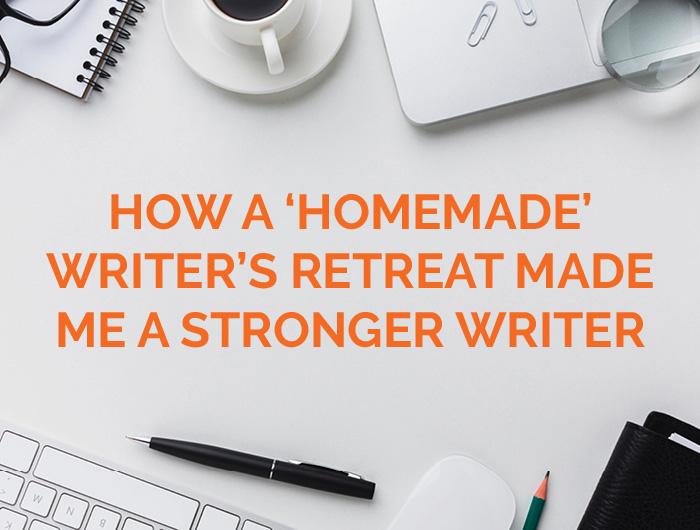 This post was written by TCCS member, Sue-Ellen Horton 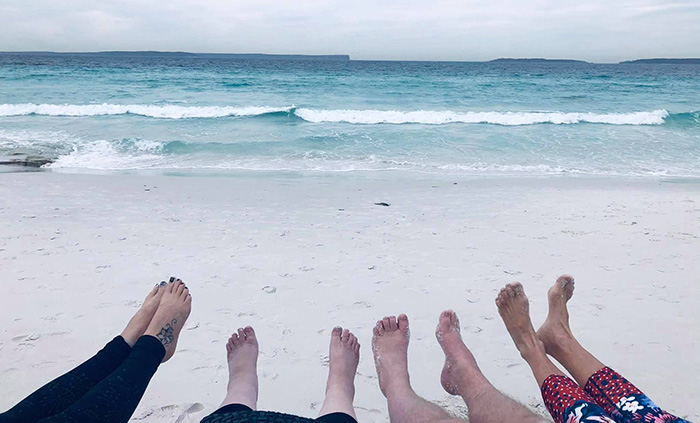 But this isn’t going to be one of those blogs waxing lyrical about pivoting during these unprecedented times. I’m so over it.

Instead, you’re going to read a tale of how four copywriters rediscovered their mojo and founded something rather fabulous.

Let’s start at the beginning

Once upon a time…

Once upon a time, there were four copywriters.

It’s a great course, and much-lauded in the copywriting world.

The title says it all: It’s a recipe for success.

And what did our four intrepid copywriters do with the course?

Nothing. Zilch. Nada. Not a damn thing.
(If you’re muttering about procrastination, you would be correct)

So when the world closed down in March these four writers, who kinda knew each other from a Facebook group, decided to band together and finish the course.

We set up a private little chat group and started making our way through the lessons.

And then a funny thing happened

The four of us got along. Like, really got along.

We all connected straight away and started building solid, genuine friendships. As 2020 progressed, our little copy crew became a safe haven to not only work through the course but also retreat from the world that often seemed overwhelming.

We talked every day, started Facetiming as a group every week and we’re all keen to meet each other in real life.

The problem was we lived at Tamworth, Port Stephens, Sydney, and Canberra, which are all quite a distance from each other. And with COVID restrictions an ongoing concern, it wasn’t at all conducive to a face-to-face catch-up.

Then Doug, our resident Scot, generously offered the use of his own private sanctuary (his holiday home) as a gathering place. All we had to do was agree on dates.

Of course, we all loved the idea.

At some point someone suggested calling it a writer’s retreat because a) we might actually get real work done if we gave it a working title and b) we were all devastated our beloved CopyCon was postponed till at least the end of 2021.

Read my review of the 2019 CopyCon held in Melbourne

And so, in the last week of August, four strangers met at a holiday house on the south coast of NSW.
(Oh wow. I just realised that would be the perfect opening line for a horror novel! Don’t nick it, anyone!)

A lot happened during our stay. Here are just a few of the many things I learned during that week away from my real life.

Escaping reality with like-minded people is good for the soul

There’s no denying that it’s intoxicating to escape the real world with like-minded souls. Even for a week, which is what we did.

For the four of us, it was a world of reading, writing, and words.

Once we realised our online connections were even stronger in real life, we relaxed and spent that first evening sharing a meal, some good wine, and lots of talks.

Lots and lots of talk. We were still talking well into the night.

Writers, wine, and words are a perfect match.

Eat your heart out, Hemingway! 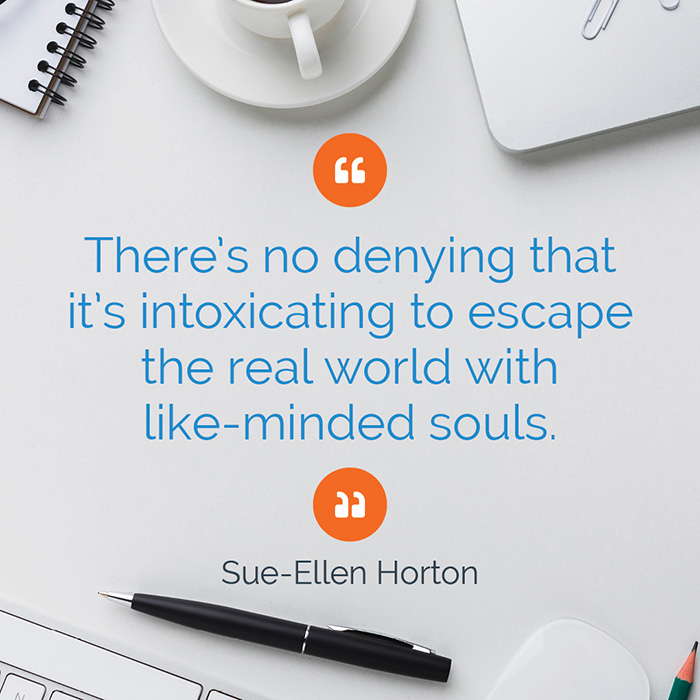 We needed a daily plan

As we parted ways on the first night, the only plan we had for the next day was to show up at the dining room table at 9 am.

We were so naïve.

Fortunately, we had an experienced event planner in our midst. Within moments Karen, our resident Hawaiian, had written up a daily plan, taped it to the window, and informed us it was how our day would pan out.

She was cracking her proverbial whip.

Okay, so I’ll admit to an initial surge of displeasure. But as the day progressed, and we began slaying our morning goals (with time to spare), it was soon replaced with genuine admiration.

Karen, like it or not, was our official daily planner.

If you’re thinking of running any kind of retreat, you need a Karen with her human-sized Post-its (and yes, they are a thing) and texta pens to take control. Otherwise, you’ll be tempted to laze around all day and do nothing.

But it wasn’t all work

We made sure to take time out for play and adventure.

We frolicked along the pristine sands of a local beach.

Indulged in croissants and doughnuts for breakfast one morning.

As the week progressed, we were fired up and ready to rock and roll. We were also relaxed and chilled, the sea air obviously weaving its magic.

Being fired up and relaxed at the same time was an interesting juxtaposition.

Have a good mix of people and personalities

There were four of us at our retreat. Three women and a man. An American, a Scot, a Brit, and an Aussie. And yes, there’s a joke in there somewhere 😉

We also had two spouses join us throughout our time away, but it was the four writers who… um… ‘retreated’.

We each have very different personalities, as demonstrated by the nicknames we gave one another in our online chat. We’re also all from different countries and cultures.

And I believe this was key to the success of our time together.

As writers, and even as human beings, we value those with opinions and life experiences different from our own. We understand the value they bring to our lives, and how they can show you a different way of looking at the world.

In hindsight, I realise this was an intrinsic part of the retreat experience.

Each day began with a guided writing exercise from the ah-mazing book Wild Mind by Natalie Goldberg.

Some of these exercises were silly and fun, while others were deeply moving and personal. Laughter and tears were shed in equal measure.

It’s also important to establish that this was a safe space.

If you’re going to dig deep, sometimes you have to visit unexpected places in your mind. And not all of them will be pleasant. Sharing can be traumatic and cathartic. 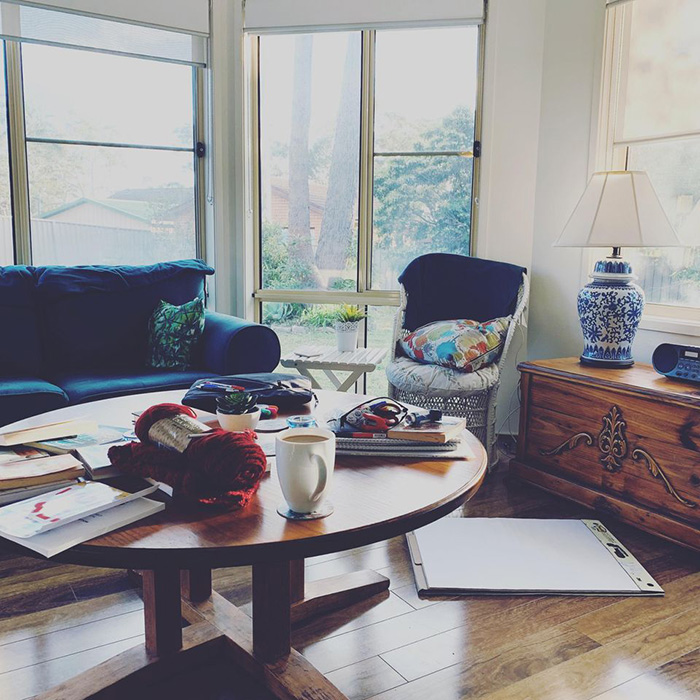 A small group in a place with large living and writing spaces.

The home we were sharing had four separate living areas and four bedrooms. We could gather together and move apart as the mood or task at hand dictated.

We had room to move and to separate. We each had our own bedroom for naps or alone time.
(As an introvert, I need an escape route during the day and a place to decompress if I’m spending all day with other humans. If not, I start to malfunction.)

We all just kinda understood that the living room with the fire was for sitting, drinking, and talking and that the lovely garden room at the back was for working and sharing ideas.

There was also the tacit agreement (the most important of all), that mornings were for coffee and no speaking.

It was acceptable to barely acknowledge each other until we sat down at 9 am to begin our day.

And we got shit done

By day three, we’d fallen into this lovely work, rest, and play routine.

And we actually got shit done.

I rewrote the home page of my website.
Updated my TCCS copywriter directory listing.
Realised what I needed to do if I wanted my business to thrive.

We all listened to a nervous Cal run through the first draft of her TCCS Masterclass.

We discussed and supported major decisions about how businesses would grow … or not.

We made lists and set goals.

We wrote them down in big black texta and taped them to windows. We read each other’s goals and refined our own.

For each fun photo we shared on social media, we worked our arses off and made the most of every moment we spent together.

Stepping out of my real life 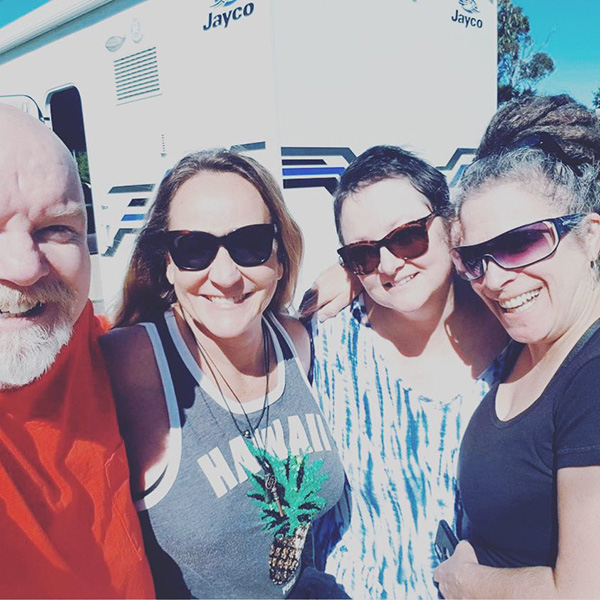 I can’t speak for the others, but stepping out of and away from my real life was a huge deal for me.

The impact this writer’s retreat had on me was significant and far-reaching.

I achieved more than I ever thought I could. I came back more confident and more relaxed. I started putting plans into action that I’d only ever wished I could.

And to my great surprise, it all worked beautifully.

Just as my friends have assured me it would. I just had to be brave.

Those five days changed my life.

They became, and still are, my safe space.

For a bunch of writers who came together because we threw money at a course, we didn’t quite complete, it was a surprisingly good outcome.

So good in fact that we’re doing it all again in February 2021.

If you have a story to tell, whether it’s business-related or otherwise, get out there and find somewhere to tell it. You’ll reap the rewards in the long run, even if it’s just proving to yourself that you can do it. 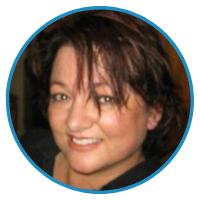 Writer, copywriter, and movie buff (not always in that order), she loves writing for brands who want their words to have more charisma, more magic…. more personality. But they also don’t want the drama of having to write it themselves.